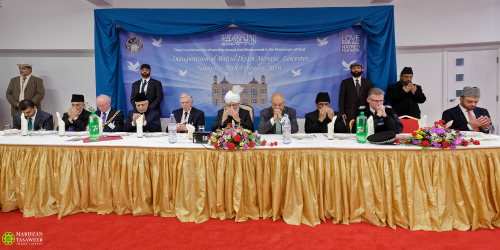 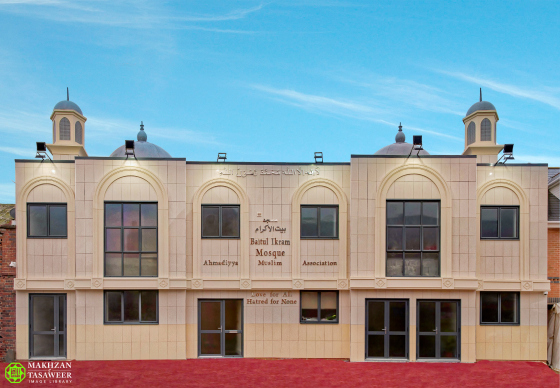 Upon arrival, His Holiness officially inaugurated the Mosque by unveiling a commemorative plaque and offering a silent prayer in thanks to God Almighty. His Holiness then led theMaghreb and Isha prayers at the new Mosque, before meeting local Ahmadi Muslims.
Later, a special reception, attended by more than 80 dignitaries and guests, was held to mark the opening of the Mosque. Various dignitaries and politicians, including Rt Hon, Keith Vaz MP and Simon Cole, Chief Constable of Leicestershire Police, attended. 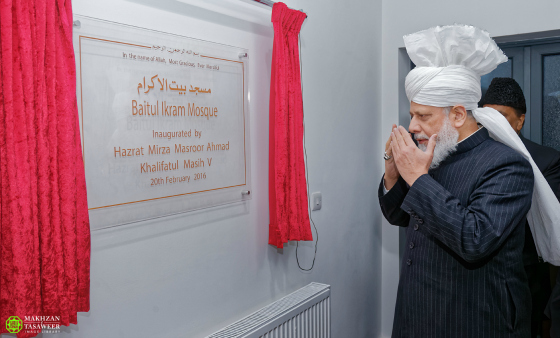 The highlight of the event was the keynote address delivered by Hazrat Mirza Masroor Ahmad during which he explained the true purposes of Mosques and highlighted the importance of fulfilling the rights of neighbours in light of the teachings of Islam.
Speaking of the history of the city of Leicester, His Holiness commended the tolerance and integration of its citizens.
Hazrat Mirza Masroor Ahmad said:
“According to the 2011 Census, Leicester remains one of the UK’s most ethnically diverse cities. Indeed, I read that recently Narborough Road in Leicester was officially recognised as the most ethnically diverse road in the entire country. In my opinion, this should be considered as a badge of honour for this city and is evidence of Leicester’s successful model of integration and inclusiveness. These are qualities that should never be forsaken or disregarded.” 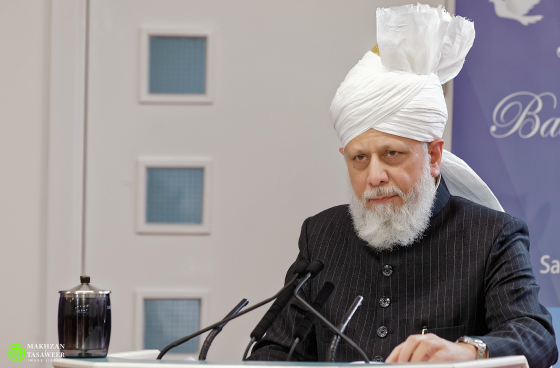 Hazrat Mirza Masroor Ahmad said:
“As we are currently living in extremely precarious times, wherein much of the world is increasingly consumed by disorder and injustice, it is the critical need of the time that we promote and spread the tolerant values that this city has epitomised for so long. We must all work towards uniting society under the umbrella of humanity and seek to foster a spirit of mutual respect for each other’s values and beliefs.”
His Holiness further said that the fact that Leicester is home to various religions and beliefs further enriches the city and “increases its beauty and attraction”.

Elaborating upon the true purposes of Mosques, His Holiness said a Mosque is a place for Muslims to congregate in order to worship the One God and to fulfil the rights of God’s Creation.
Hazrat Mirza Masroor Ahmad said:
“I am confident that every Ahmadi Muslim who comes to worship here will not only seek to fulfil the rights owed to Allah the Almighty but will also seek to fulfil the rights owed to the neighbours of this Mosque and indeed the wider community. Thus, there is no need to fear this Mosque because only sentiments of love and compassion towards our neighbours will reverberate and echo in every direction from here.”
Referring to the motto of the Ahmadiyya Muslim Community, His Holiness said:
“You will see for yourselves that our motto of ‘Love for All, Hatred for None’ is not just an empty proclamation or a hollow slogan.”
Speaking of the diversity of Leicester and how people have long united for the greater good of the society, Hazrat Mirza Masroor Ahmad said:
“Most surely, Ahmadi Muslims will forever seek to uphold this noble tradition.  In fact, rather than just uphold it, we will always seek to build upon these strong foundations and further develop these qualities of mutual tolerance and open-heartedness. According to the teachings of Islam, we will love and care for our neighbours and fulfil their rights in the very best manner.”
His Holiness said the Holy Prophet Muhammad (peace be upon him) taught his followers to like for others what they liked for themselves.

In reference to chapter 22, verse 41 of the Holy Quran, His Holiness said that contrary to media’s portrayal, Islam sought to protect the right of all religions. By virtue of the commandment of this verse, the early Muslims were permitted to fight defensive wars in order to protect all religions, rather than just Islam. If the Muslims did not fight back, then no church, synagogue, temple, mosque or place of worship would remain safe.
Hazrat Mirza Masroor Ahmad said:
“It is the duty of Muslims to live peacefully alongside others and rather than oppose other religions or to harm their places of worship, it is the duty of Muslims to protect them.”
His Holiness said in light of the true teachings of Islam the actions of those so-called Muslims who perpetrate cruelties are therefore “indefensible and entirely unjustified”.
The Khalifa said that the need for mankind to join together for peace is more critical now than ever before.
Hazrat Mirza Masroor Ahmad said:
“We must unite in our efforts to promote peace and mutual understanding, so that the world can be saved from that horrific destruction, in the shape of a catastrophic world war, that seems to be drawing ever closer by the minute. In the past, the people of this city came to learn the benefit of peace and tolerance after living through warfare and violence. Thus, I pray that the lessons of the past are enough for us to realise our responsibilities to safeguard our future.”
Addressing the local Ahmadi Muslims, Hazrat Mirza Masroor Ahmad said:
“I also wish to say to the Ahmadi Muslims who are living here that they should seek to portray the true teachings of Islam at all times. Their conduct and character should always remain exemplary. They should always remember that if they fail in their duties to serve others, then their worship will neither please Allah, and nor will it prove of any benefit to them. Nor will there have been any benefit to having built this Mosque.”
Concluding, His Holiness said:
“God Willing, this Mosque will come to be known as a beacon of light that illuminates its surroundings and will come to be known as a true symbol of peace in Leicester. May Allah enable the local Ahmadi Muslims to fulfill the true purposes for which this Mosque has been built. Ameen.”
Earlier, various guest speakers also took to the stage in order to congratulate the Ahmadiyya Muslim Community on the opening of the Baitul Ikram Mosque.
Simon Cole, Chief Constable of Leicestershire Police said:
“The Ahmadiyya Muslim Community works for the betterment of the community in Leicester and Leicestershire and so it is a privilege to be with you today and we will remain with you in spirt every day of every week of every year.”
Riaz Ravat BEM, Deputy Lieutenant Leicestershire said:
“The presence of this new Mosque strengthens Leicester’s reputation for inter-faith harmony. Certainly, the Ahmadiyya Muslim Community has proved itself as a selfless community that is contributing significantly to this country.”
Rt Hon Keith Vaz, MP for Leicester East said:
“This Mosque will not just be a refuge for the worshippers but is open to the entire community and will be means of spreading the Islamic values of peace and kindness… The presence of His Holiness (Hazrat Mirza Masroor Ahmad) is a great honour for our city. Your presence is more important for us than anything else. It makes this a very, very special day.”
The formal session concluded with a silent prayer led by His Holiness followed by dinner.